There were two last things that I wanted to experience in India before moving on: New Delhi, the capital and home to 26 million people, and the Taj Mahal, India’s most famous monument, in the nearby city of Agra.

A good amount of people who visit India actually only visit these two places, plus the city of Jaipur, which was the pink/orange city I described a few posts ago. Together, they are called the Golden Triangle, and many blogs I read prior to coming to India suggested this route as a potential first India trip.

Personally, I can’t think of a more terrible introduction to India.

Had I only visited those places, I’m not sure I would want to return to this country.

My time in New Delhi was about 5-6 days in total, but broken up into several pieces as I stopped there on my way to and from a few different places.

The experiences I had were quite varied, but I came away at the end without any fondness for Delhi as a city.

Except for its metro system, which was incredible and I enjoyed immensely.

The metro was clean, efficient, and well-organized. Having experienced the New York metro at rush hour, I could not believe what I witnessed in New Delhi at rush hour. A train full of people pulled up to a platform that was also full of people at the transit hub, Rajiv Chowk. The doors opened. And there was no pushing or shoving as people tried to get on and off at the same time. The people who were on the train exited while the people who wanted to board waited on one side. Then, when people had finished disembarking, everyone entered the train. Amazing.

I also really enjoy that instead of dispensing disposable paper cards like we use in the US (which inevitably end up littering the ground outside the metro station) the metro here gives you a token as your ticket, which you then drop in a slot to be able to exit the system at your destination. The tokens are then re-used. So sensible and environmentally friendly!

Good things about my Delhi experience:

View from my friends’ apartment outside Delhi

Bad things about my Delhi experience:

Me trying to look happy at the Red Fort in Delhi

I was actually excited to visit New Delhi. I had heard so much about it, and even though other travelers generally said they disliked it, I wanted to experience it. I recently read a book by Ariel Levy, The Rules Do Not Apply. This quote, about her drive to travel, jumped out at me:

“I wanted to meet those mysteries, too. I wanted to feel the limitless Mongolian steppe spread out in front of me. I wanted to know what it smells like in Rajasthan in the morning. 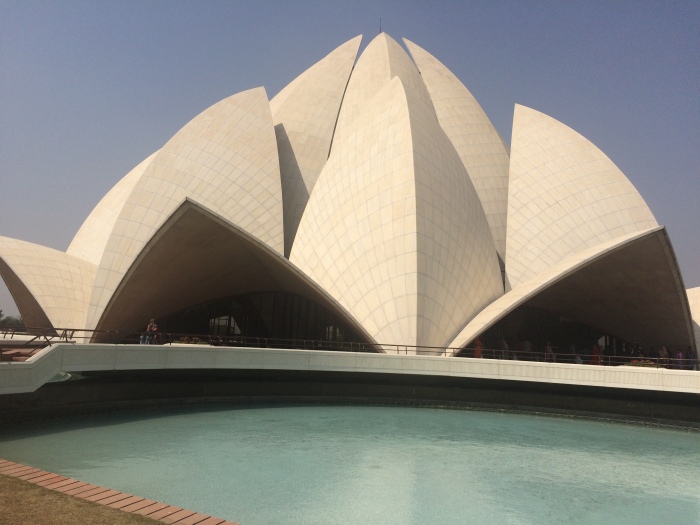 The first time I visited, it was a weekend and so my friend had time to take me around everywhere. It was nice to have my first introduction to the city be with a local person who knew the ropes. But his style of living is different than my style of traveling. As a backpacker, I’m used to doing everything the cheapest way. This is not how the middle class of India lives, because India has a huge spectrum of incomes and classes and each person lives according to his place on that spectrum.

So when we went sightseeing, it was an all-day affair where we hired an Uber for 7 hours and the driver drove us from place to place. I felt strange and elitist seeing the city in this way, but I admit the air-conditioning was a haven. Even with this method of transport, our photos from that day just got sweatier and more disheveled.

One of our last stops: sweaty and so tired

When I came back to Delhi the next time, it was during the week and my friends had to work, so I seized the opportunity to explore the city my way. I took the metro and I walked and I went some places that we had missed the time before.

And after doing it both ways, I have to admit that Delhi is a city that is best seen through the windows of an air-conditioned taxi. And I hate that.

(I also hate that this post is generally pretty negative – I usually like to focus on the positive things, but I also want to write honestly, and in this case, my honest experience was not that positive. So I will share that with you.)

The days that I explored by myself via public transit, I was constantly so HOT and exhausted that I couldn’t really focus on anything else. Those days, I just felt like I was doing everything wrong, which was a funny feeling to have at the end of my India trip when I generally felt like I was getting the hang of the country. Maybe part of it truly was just being there at the wrong time of the year. It would probably be significantly more pleasant in cooler weather. 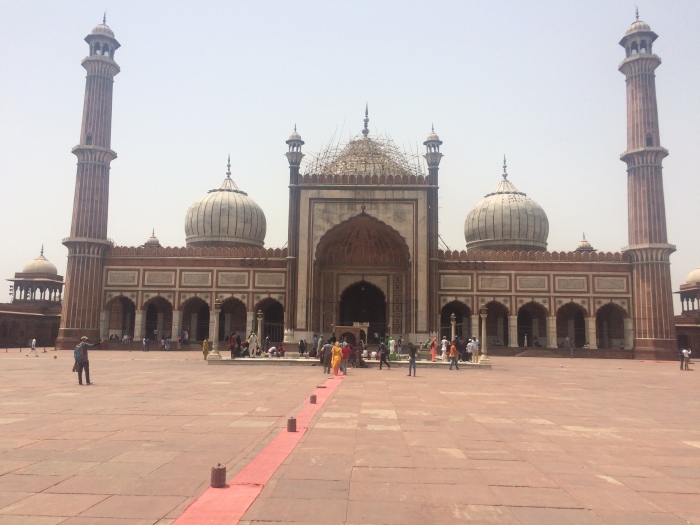 It was just one of those times when everything felt wrong. I visited the mosque pictured above in the old part of the city. It is one of the icons of Old Delhi and the mosque complex is a huge enclosed square that is really beautiful. Of course at mosques you have to remove your shoes, and the pavement was so hot on my bare feet that I practically had to run from one side to the other. To make matters worse, because my shoulders were covered only by a shawl and not by a full shirt, when I bought my ticket to enter the complex, the gatekeepers made me wear this MASSIVE, seafoam green, smock-like garment. It covered every inch of my body, from my neck to my wrists and came down to my feet. It was quite embarrassing. And also VERY HOT. And as I was walking around, feet burning, sweating from every inch of my body inside this huge coat-like object, feeling ashamed for having been dressed too immodestly in the first place, I STILL got asked to take selfies with a handful of people. So funny.

Then there were the men.

Especially in Old Delhi, I felt like there were constantly men staring, leering, and making comments as I was passing. I was dressed conservatively, but that didn’t seem to help in this situation. There were a few who followed me, and a couple who ‘accidentally’ bumped into my chest or butt, but mostly it was just people staring with unfriendly eyes. (And yes, there is a difference between friendly and unfriendly staring, and yes you know it when it is directed at you.) 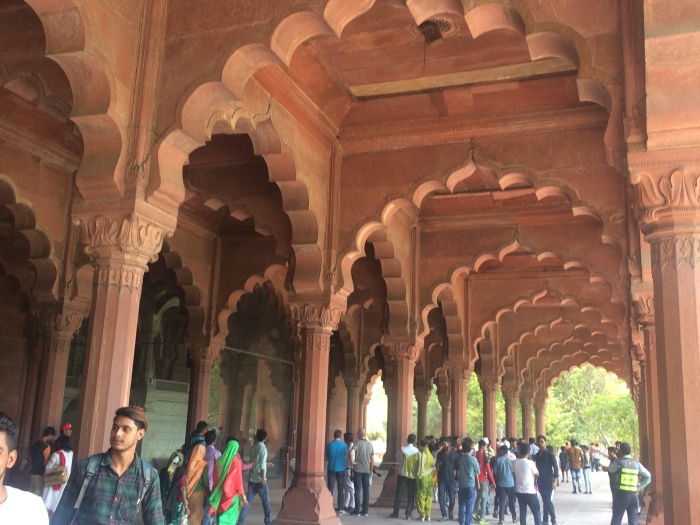 I paid 5 rupees to use the bathroom at the Red Fort (even though I had already paid the exorbitant tourist fee to enter the fort in the first place, not that I’m bitter about it), and as I was standing at the sink, brushing my sweaty hair, I saw a man standing outside the open door watching me in the mirror. OK, maybe his wife is in here and he’s waiting for her, I thought. I met his eyes, and he didn’t look away. I moved to the other side of the counter to get out of his eyesight and carried on. After a few minutes, all the other women who were in the bathroom exited and I followed them. The man was still there, still staring at me.

These are the kinds of things that made me feel so weird about the men in Delhi.

There were also men who spoke English and came up to me in all the various places I visited. Some of them were nice and some of them were creepy; one tried to hold my hand and put his arm around me which was not appreciated; some of them blatantly ignored the fact that I had headphones in and sunglasses on – obviously not wanting to talk. Of course these kinds of things also happen in other countries and in the US. But it was mostly just the volume in such a short time that I had never experienced before.

I can usually handle myself – in a city, around men, around foreign men – but as I sat in the women-only car on the metro heading back to my friends’ house that evening, I was so exhausted, and so grateful to be in a space safe from all those male eyes and male hands. And as I looked around at all the young Indian women in the car with me, I realized that this is what they have to deal with every day. Because my experience was not related to my being a foreigner – Indian women experience the same things, and much worse.

And that is a very heavy thought.

Women in the Delhi metro

All this said, I would give Delhi another chance, given the right circumstance to return. I know that there are lovely things about the city, I just couldn’t find them this time. We’ll see if life brings me here again and if the experience is different.

This post got too long – I’ll have to save the Taj Mahal for the next one (which I promise will be shorter and published soon)! If you read until the end, you are a champion. Thank you!

4 thoughts on “New Delhi, not my favorite place”