So I was in a café in Tirana, Albania and I had decided I wanted to go to Greece.

I pulled out my phone and asked the nice Albanian barista who spoke no English to connect me to the WiFi. I looked at my maps app and saw there was a town in Macedonia called Ohrid that looked like it was on the way to Greece from Tirana. A quick google search on Ohrid turned up some gorgeous pictures and reviews from other travelers saying that it was a pleasant place to visit. They said you could get there from Tirana easily, and it looked simple enough to get to Thessaloniki after that. Done. I walked to the bus station and bought a ticket for the next day.

The bus ride through the rural parts of Albania was a little more like what I expected from Albania. it was a dreary day, not exactly raining, but misting as we traversed dark tunnels through the small Albanian mountains and passed by small, crumbling houses in poor rural communities. I definitely had a case of what my friend Rachel calls “bus depression” – the unmoored, melancholy feeling you can have when leaving one place and heading to a new one on a bus.

The border crossing into Macedonia was much more intense than the one into Albania.

First of all, the border is basically on top of a mountain, so it was snow-covered and freezing and felt quite dramatic. We drove through a customs booth where they collected our passports. Then the bus pulled into this large concrete structure that was like a mix of a giant garage and a mechanic’s bay.

We were instructed to get off the bus, collect our bags from the storage area and form a line. Then a very stern Macedonian customs official went from person to person, asking us to open our bags so he could inspect the contents. Eventually everyone got back on the bus and we continued on into Macedonia.

Ohrid is not far from the border and is quite beautiful, with the feel of a small town that attracts huge numbers of tourists in the summer. There are many cobblestone streets and cute little shops and restaurants. It borders a giant lake and is surrounded by mountains, which creates a very striking image. 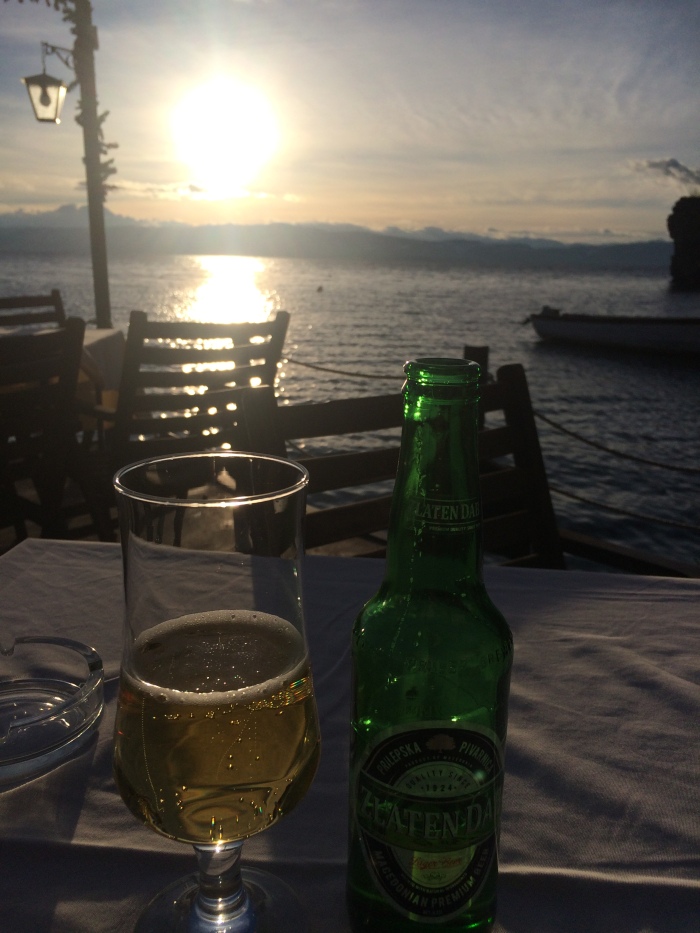 Local beer for one at a restaurant in Ohrid

I took myself to dinner at a restaurant on the lake, which was gorgeous and actually quite reasonably priced. It did get a bit chilly — it had snowed that morning and though it had melted by the afternoon, it still wasn’t warm. The waitress kept asking me if I wanted to go inside, but the view was so beautiful that I declined, saying I wasn’t cold. She must have known I was lying, because she brought me a blanket a few minutes later. 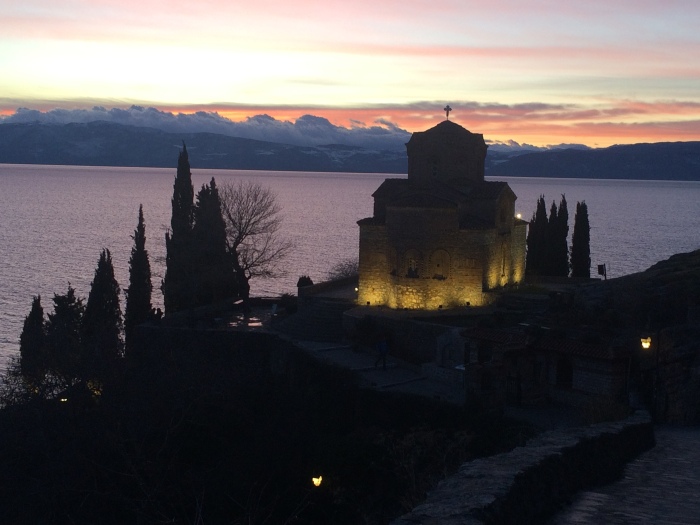 Unfortunately the hostel I stayed at was awful: the owner was out of town and the friend he had asked to watch over things while he was gone seemed to wish that he was somewhere else as well. When I first arrived, I actually thought it was closed, because it took about 5 minutes of ringing the bell and waiting and my taxi driver pounding on the door before someone answered. Only one room was heated and it wasn’t the one that had the beds in it. I spent an unpleasant night there and decided it was time to move on.

I had done a bit of research on how I could get to Greece from there but I’ve found that usually asking the hostel staff is the best method for gaining up-to-date information. So when the guy working there told me, “oh yes, no problem, you can get to Thessaloniki from here easily. Just take a shared taxi to Bitola, then there are buses every hour from there to Thessaloniki,” I set off to follow his instructions. He said it should cost about 15 euros (about $20) for the whole trip.

A few hours later, I found myself standing in a deserted bus station in Bitola, being told that there were no buses from there to Greece.

Seriously?? What a nightmare.

“You can go to Skopje (the capital of Macedonia, a few hours north), and then go from there to Greece,” the woman working at the desk told me.

Back outside, the driver of the shared taxi I took from Ohrid said he would take me to the border and then I could get another ride from there to Thessaloniki. I didn’t like that idea too much, imagining myself standing on top of that mountain where the border with Albania was, trying to talk my way into a passing bus or taxi. And would there be any passing? I didn’t know, and wasn’t in the mood to trust another stranger about travel advice.

The taxi drivers from that town were also vying for my business. They said one of them could take me to Phlorinas, a transportation hub in northern Greece, from which there were definitely buses to Thessaloniki. However, they said the price would be 30 euros, on top of which I would have to pay for a bus afterwards.

It doesn’t sound like a ton of money, but the way I am able to travel for such a long time on a limited budget is by keeping my costs very low – staying at the cheapest hostels, flying on budget airlines, buying groceries instead of eating out all the time, walking instead of taking buses or taxis, etc. This trip was threatening to completely blow my transit budget for no good reason.

I wasn’t sure I even had enough cash on me. I was stressed and angry.

I explained to the taxi drivers what I had been told about buses to Thessaloniki and the price and they just laughed.

“That’s completely not true,” they said. “That person had no idea what they were talking about.”

I stood there, staring at the empty bus station and at the taxi drivers and the lack of other travelers who could possibly be going in my direction and want to share a taxi, wondering what to do.

I think the drivers were a bit perplexed with me. We didn’t have much language in common – one spoke some English, another some French, and the others just Macedonian or Greek.

But they made small talk, trying to put me at ease, and asked where I was from. When I said I was from the US, a fatherly gentleman said he had a daughter about my age that lived in the US, in Colorado! I asked where, and he showed me an address in Aurora, just a few minutes from where I was living last year in south Denver. Bizarre coincidence.

For some reason that made me feel a little better and I also realized that I had very little choice. It was already mid-afternoon and if I went to Skopje, I would spend nearly the same money and wouldn’t get to Greece until nighttime. I always try to avoid arriving in a new city late at night, especially when I’m by myself. So I agreed to let the fatherly man drive me to Phlorinas.

We chatted in halting English the surprisingly short distance to Phlorinas and he walked me into the bus station and made sure I got a (surprisingly expensive) ticket to Thessaloniki before he left. Nice guy, and I never would have met him if my plan had gone the way I thought it would.

Sitting on the bus, I was dismayed at how much of my money I had parted with that day, but as I wrote in my journal that evening, “even with everything that went wrong, I still made it here, and it was okay.”

It was a good travel lesson – even when nothing goes right, things usually still work out if you can just remain calm and go with the flow. I’m a person who likes to have a plan, so this is not always easy for me (OK, it’s never easy for me), but it’s true. Flexibility is essential in travel, and I’m trying to embrace it more.

And Thessaloniki turned out to be a lovely place, where I stayed for a month. More on that in the next post… For now, here’s a picture of the Aegean Sea from Thessaloniki.

2 thoughts on “The journey to Greece”