When we began this trip, I told anyone who asked that Daniel and I would probably spend Christmas on a beach in Senegal. It sounded so nice and warm, and I figured that as long as we weren’t going to be at home, we could be somewhere with nice weather.

However, by the time December rolled around, Daniel had convinced me that we should spend Christmas in Budapest.

He has friends there who could provide us with free accommodation, and it would be Christmasy, he said! (Also, it turned out, he had plans to meet up there with an Italian woman he had met in Morocco. Aha!) Our plans were flexible and we hadn’t yet bought tickets anywhere else, so I figured we could do a quick layover in Europe if it was so important to him.

On December 23, I boarded a flight from Agadir, Morocco to Budapest for my first European adventure.

I was dreading the cold.

Since I had packed for an African trip, I feared that I was not equipped for a European winter. But when I landed, Daniel was waiting with a giant coat he had bought me for 1 euro at a thrift store. 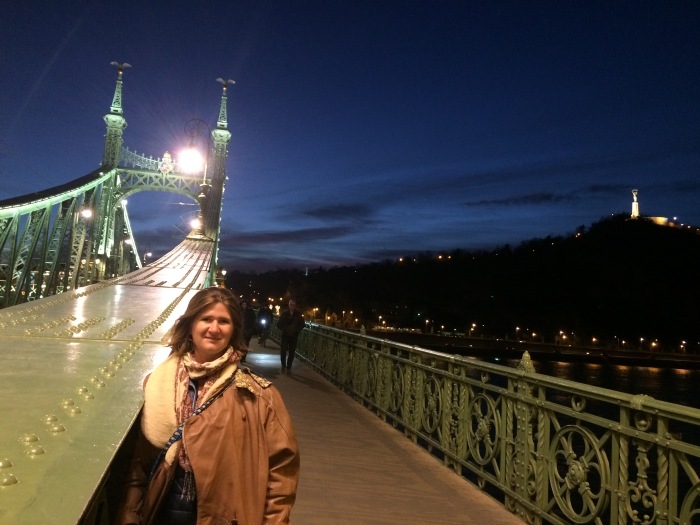 Exhibit A: Giant coat. Not at the height of fashion, but quite warm;)

Daniel said he had experienced some culture shock leaving Morocco and ending up in Hungary. In contrast, I could literally feel a positive difference in my body on my first day in Hungary. I was so relieved to be somewhere where my gender was not a strike against me that it felt like a physical weight had been lifted from my shoulders.

I was surprised how at home I felt in Europe, considering I had never before been to Europe.

And I was enchanted by all the Christmas decorations, lights, and general holiday spirit in the air — a definite change from Morocco, which as a Muslim country had no Christmas spirit.

I love Christmastime; I think the magic of the holiday season is real and beautiful. I still have palpable memories of cold Christmas Eves from my childhood, looking up at the sky, past the lights twinkling on our house, with absolute wonder and sheer joy that Santa was flying around with his reindeer up there. I still feel that wonder and joy around Christmas, albeit for different reasons.

The next day, Daniel and I went to an outdoor Christmas market, where we drank mulled wine (kind of like apple cider but with wine instead of apples), listened to Christmas music playing over the speaker system and watched a unique light show on the side of a large church. Christmas markets are apparently tradition in a lot of Europe. In the weeks leading up to Christmas, they will appear in communal areas, groups of tents selling gifts, food, and of course, the mulled wine. Germany is rumored to have the best Christmas markets, but I thoroughly enjoyed the Hungarian ones that we sampled.

Budapest is just a festive-looking city

On Christmas Day, we took the train to a small town in the Hungarian countryside to meet up with Daniel’s friends, Shawn and Dóra. Shawn is American; Daniel knows him from college, and Dóra is Hungarian. Her family graciously invited us to stay with them and to join them for their Christmas meal, an amazing spread of traditional Hungarian food. We spent a couple of nights at her parents’ house and then took the train back through the gorgeous countryside to Budapest. 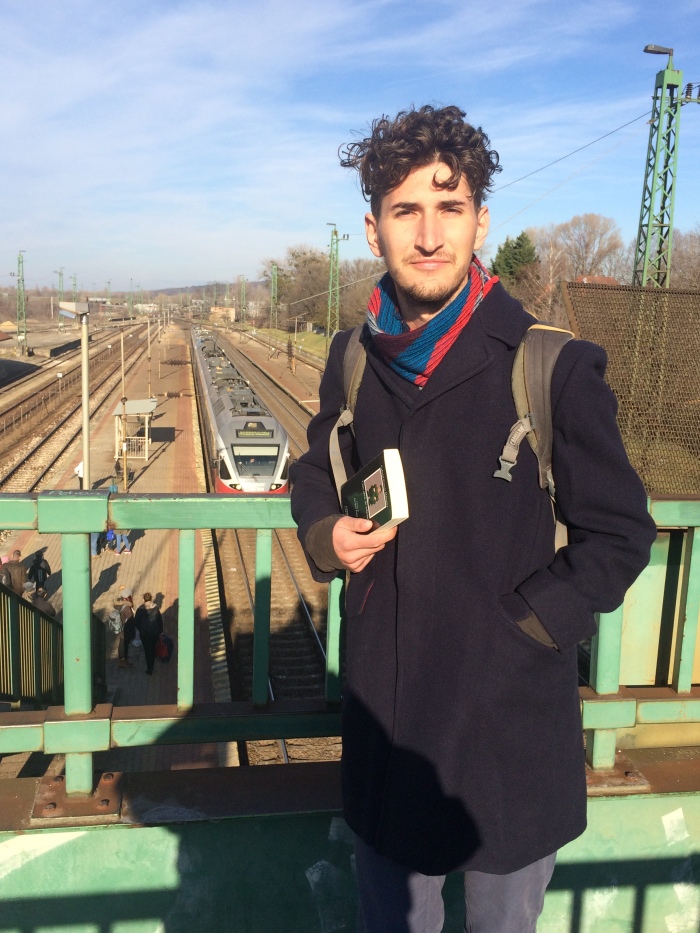 At the train station

We enjoyed a week in Budapest, kitten-sitting for Shawn and Dóra.

Budapest is a lovely, laid-back city, split down the middle by the Danube River and beautiful bridges that connect the two halves of the city (one side is Buda, the other side is Pest). The architecture is old and calls up images of history, but overall it has the feel of a young person’s city, with abandoned factories being turned into hip bars and cafés and the whole city deserted around the holidays as the city-dwellers return to their family homes in the countryside.

Just before the end of the year, Daniel and I split ways again.

He wanted to stay in Budapest for New Year’s to celebrate with his friends at a giant party in the city, but I didn’t particularly care where I spent new year’s and was aghast at how expensive accommodations were in Budapest during the holiday. I realized I could literally fly to another city, spend a few nights there, and fly back for less than the price of a hostel during New Years in Budapest. So that’s what I decided to do.

I flew to Podgorica, Montenegro for a ridiculously low price (something like $20) and spent New Years there.

I knew nothing about Montenegro prior to going, but I discovered that it is a beautiful country. It used to be part of Yugoslavia and a major tourist destination, and then when that country broke into several smaller countries, the war that ensued scared away all the European tourists who used to visit Montenegro, though there was no bloodshed in that area. I only spent a few days in Podgorica, but I enjoyed beautiful nature, great food, cheap beer, and affordable prices overall.

The New Years celebration was one of the better new year’s that I have had in my life. There was a whole day of festivities in the city square, leading up to a famous Croatian singer – Tony Cetinski – performing as the clock struck midnight. I went to the concert with some people from the hostel and had an amazing time. The music was good, though I couldn’t understand the lyrics, and people were setting off fireworks throughout the crowd, so they were exploding directly above us. It was thrilling and fun, if a tad dangerous.

After New Years, I took a bus a few hours to Tirana, the capital of Albania.

I couldn’t believe how easy and orderly the border crossing was, as the last time I crossed a border in a bus was the Kenya-Uganda border, which was a free for all where everyone had to get off the bus, make a mad dash for the customs forms, talk to the border agent, get their passport stamped, and then find the bus and get back on. I remember being terrified that the bus was going to leave me behind and I believe it was a valid fear. In contrast, at the Albanian border, a customs agent boarded the bus, collected all the passports one at a time, and then returned them after they had been verified. (To my disappointment, though, they didn’t stamp my passport. Apparently you only get a stamp if you enter Albania by plane.)

I don’t know what I expected from Albania – I guess somewhere kind of scary and dark and depressing – maybe because, as my friend Joel pointed out, in the Harry Potter books, Voldemort goes into hiding in Albania after failing to kill Harry. The kind of place where a dark lord can hide must surely be a little seedy, right? 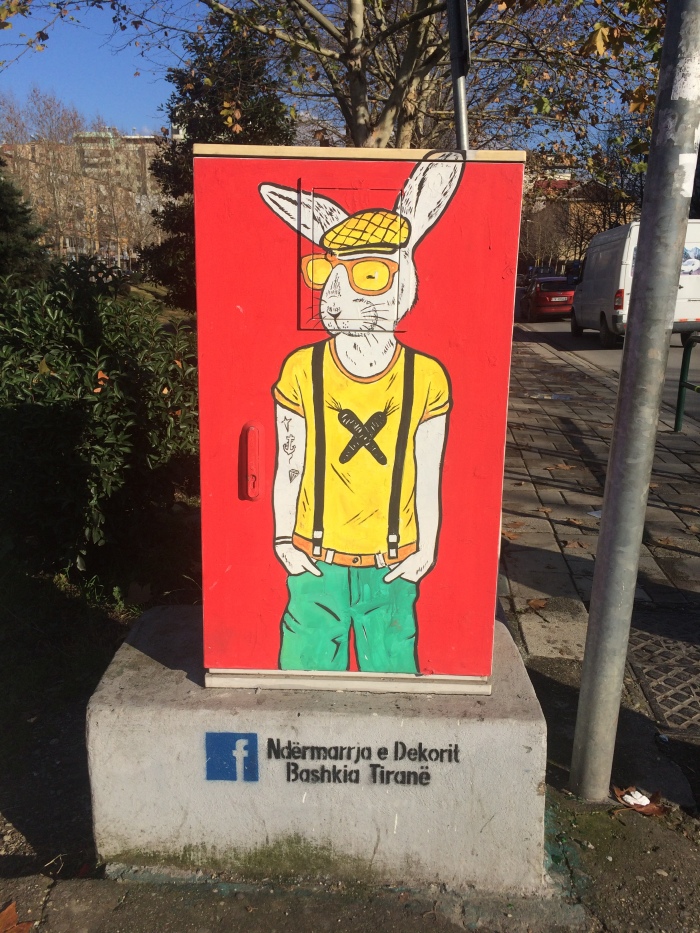 What is less seedy than a hipster rabbit on a utility box?

But Tirana is a colorful, vibrant city that feels like it is up and coming. It was not at all what I was expecting, and I thoroughly enjoyed my two days there. I got to experience another Christmas market there, with a giant Christmas tree and a carnival for kids and lots of little tents selling food and drinks.

Albania is famous for its café culture, where people sit and chat for hours, so of course I had to sample that. I also walked around a huge swath of the city, enjoyed nature in the Albanian Central Park, and tasted some delicious Albanian baked goods. There are a lot of relics from the communist era (a tough 50ish years of “Stalinst-style” governance, as Wikipedia describes it, which ended in 1992) in Tirana, and Albanians seem to value these as reminders of a time that they want to be sure not to repeat. I toured an old bunker, which has been turned into a museum full of cautionary tales of a government that spied on its people and disappeared many, and I climbed this deteriorating pyramid, met some teenage Albanian boys doing an elaborate photo shoot on top, and then slid down like a giant slide. 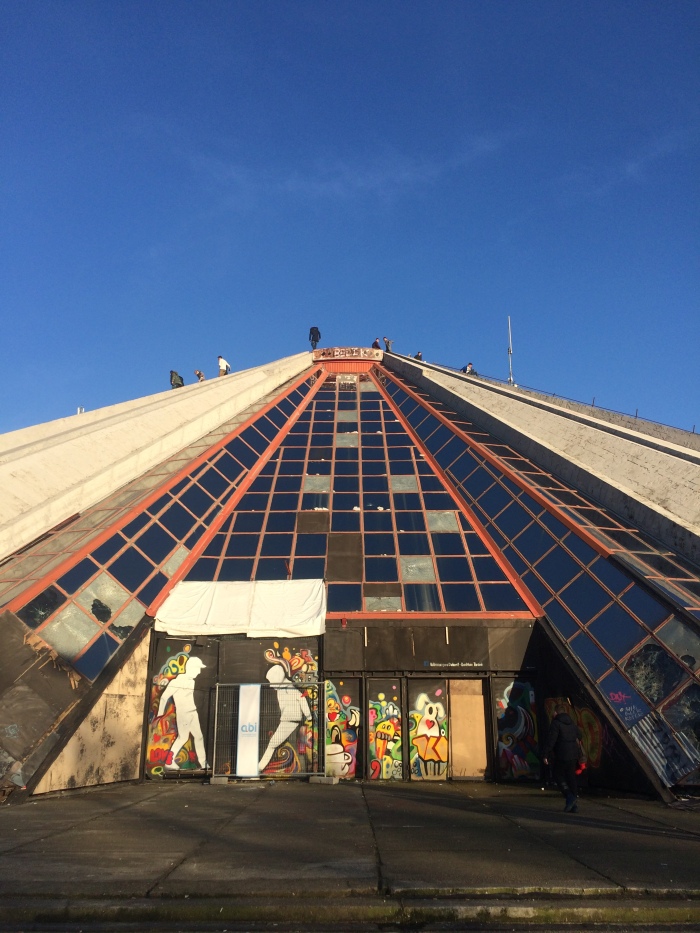 By this time, Daniel had told me that he was not going to be able to continue the trip with me. Instead, he was headed to Italy to chase love. I was a bit disappointed, of course, but I also told him that I supported his decision. You only encounter love so many times in this life, and you need to know when to follow it.

So then I was on my own and could decide to do anything I wanted. What freedom.

I decided what I really wanted to do was make my way to Greece and get my bearings before continuing with the trip as planned. My grandfather is Greek and throughout my life, I have heard him talk about our heritage and the amazing country that Greece is, and I have always wanted to visit. So, while sitting in an Albanian café, I hatched a plan to travel to Macedonia and then continue on to Greece.

That trip was a bit of a saga so I will tell you about it in the next post! This one is long enough. Macedonia was gorgeous, though. More about that next time!