Essaouira (esso-weera) is a lovely city on the southern coast of Morocco. It is a laid-back place, known as the “Windy City of Africa.” It sports white paint on its buildings, the scent of grilled fish blowing on the air, and the calls of seagulls mixing with the call to prayer which sounds from the mosques.

This city fascinated me and pulled me in as I tried to put all its pieces together to see a comprehensive picture of the place.

And the people that I met here – so many vibrant and beautiful souls.

(This is Rachel – we didn’t meet here, but she is a beautiful soul and we shared Essaouira and fresh-squeezed juice together)

It was the first place I visited on this trip where leaving wrenched my heart because of the people I wasn’t ready to part with.

Essaouira has a lot of different facets to it, which is part of what makes it so intriguing. There is a lot of tourist infrastructure because of the good surfing and wind surfing that draws a lot of foreign visitors. But there is also a huge local fishing industry, with a fleet of boats that launch from Essaouira’s port around dawn each morning and come back later in the day with nets full of different sea creatures. It also has an art scene, with musicians playing on the street and local artists selling their pottery, paintings, and other handmade goods. It has a Jewish quarter, where there are a few remaining Jews still living. And it has a seedy local bar, called The Hole, where backpackers and Moroccan men go to drink cheap beer each night.

The medina is the heart of the city and inside its walls, the streets are lined with shops, restaurants and cafés. No vehicles drive in the medina, and during the day, vendors wheel carts out into the middle of the streets and sell bread, fruit, fish, and more. 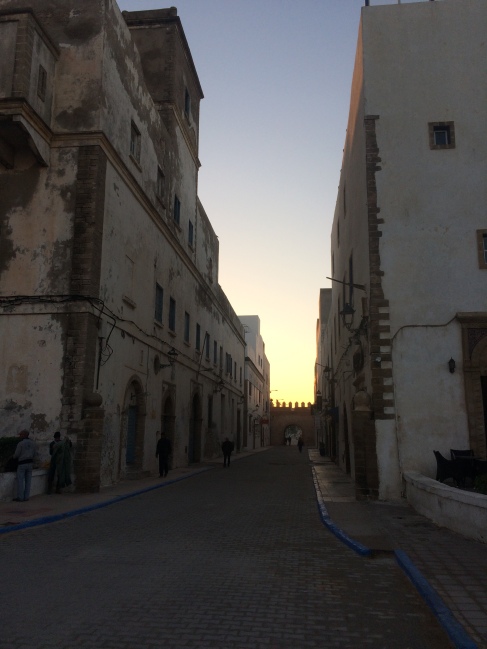 Early morning in Essaouira – it’s rare to see the streets so empty.

I told Rachel that Essaouira felt European to me, and she said, “you’ve never even been to Europe!” Which is a fair point. But there are a lot of cafés boasting coffee drinks and cocktails that are more European than Arabic, as well as restaurants serving crèpes and gelato, which I never saw in any other Moroccan city. These are certainly remnants of the Europeans who have stayed in Essaouira over the years. It’s nice; it feels familiar, and I dined on the crèpes on several occasions while I was there. I also went to the cafés almost every morning and enjoyed the fact that I was welcome there as a woman, even by myself, in contrast to Moroccan cafés which are typically reserved for men, and where I certainly wouldn’t go by myself.

The local food is better than the crèpes, though. Most days, I ate lunch at a small restaurant in an alley where a lot of locals eat. The restaurant serves an amazing baysara soup (a thick soup made of blended chickpeas and spices) for about $1. There isn’t much seating, and there aren’t many choices on the menu, but the food is amazing and there’s something nice about sitting right in the middle of everything and seeing life go by.

My favorite part of Essaouira is its port.

The port is enthralling, always in motion, and feels like it embodies the real spirit of the city.

One evening, I walked there with some other people from the hostel as the sun was setting. It was quite the scene. There were fish everywhere – on sale by small vendors along the walkway, being unloaded from boats, piled high in carts pushed by old men or pulled by a motorcycle. And because of the fish, hundreds of seagulls circled above, waiting for the opportunity to swoop down and steal one. The sky was a deep red color that contrasted with the blue of the ocean and beautifully silhouetted the seagulls in the air. Everything was wet with saltwater and men were shouting at each other as they brought in the last of the fishing boats and unloaded their catch.

A young Australian man who was with us kept saying, “This is like the apocalypse! This is literally what the apocalypse would be like if it happened.”

I thought it was enchanting, and also a little ominous.

Port in the morning (not ominous like in the evening)

Rachel lifted her camera to take a picture of one of the boats as it came in and a man on the boat stopped what he was doing, squared his shoulders to us, and presented his middle finger. He stood there like that until she lowered her camera and we all looked away nervously. It was unpleasant, but it did make me think about what life might be like for one of these fishermen, waking up before dawn each day and dragging himself down to the port with its overwhelming smell of fish before breakfast. Then the hard work of getting the boat ready for sea and hauling nets in and out all day. On a good day, they catch a lot early in the day and can come back to shore. On a bad day, it might take all day and they still don’t catch enough for everyone to take home enough money that evening. If it were me, I would probably be annoyed with youngsters who were just having a nice time on vacation, too. There is another part of Essaouira.

I went down to the port almost every morning that I was there, hovering quietly around the edges (not taking any pictures of people, just in case) and watching life go on.

It took me a week (and a lecture from a Moroccan gym teacher) to realize I could go for a run on the beach – I had gotten so out of the habit of exercising since I left Chefchaouen. So I ran 10k at sunrise one morning.

It was absolutely glorious and my legs were so sore afterwards that I couldn’t walk properly for days. Worth it. 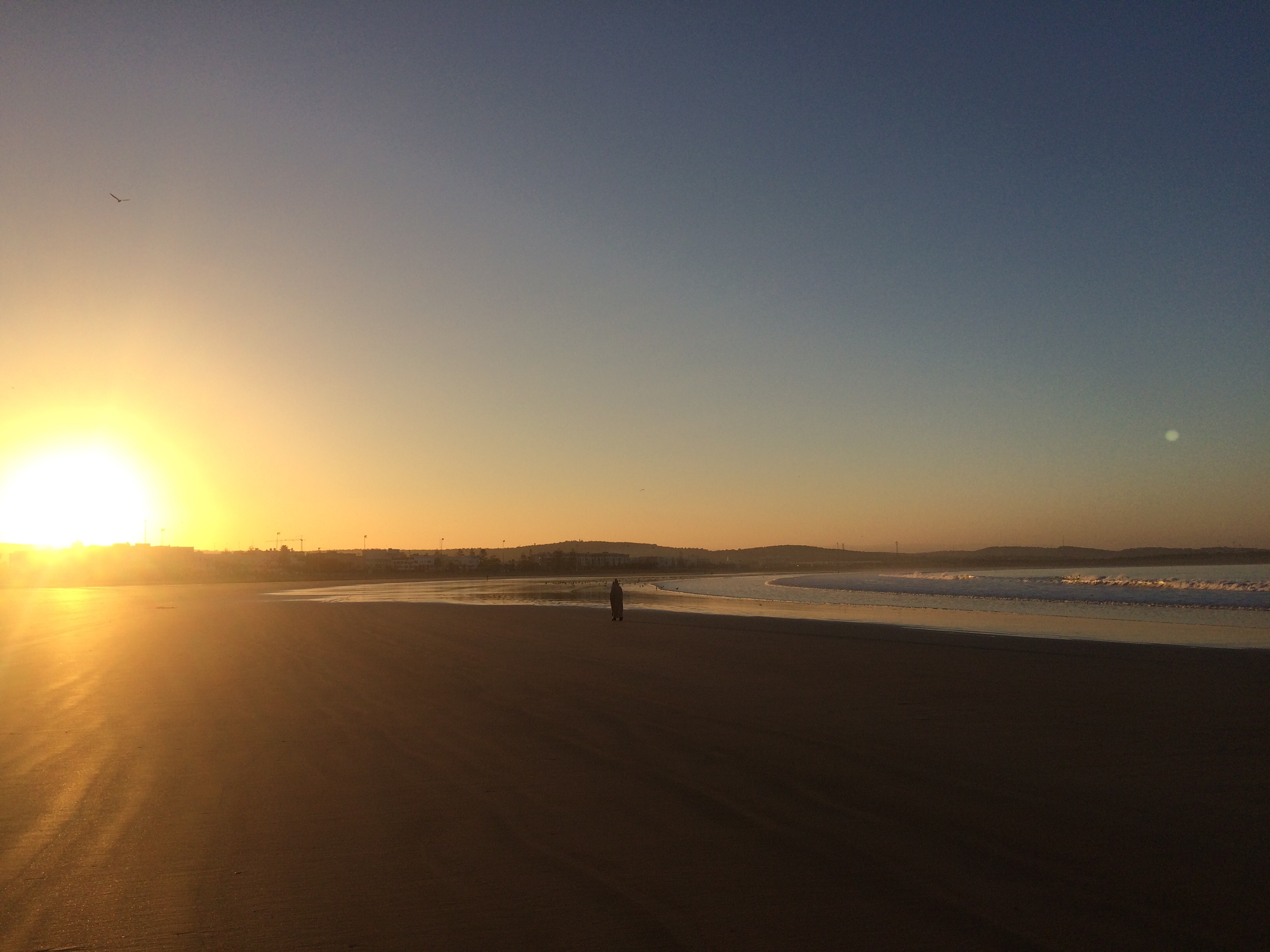 A big part of why I enjoyed my time in Essaouira so much was the hostel I stayed at and its amazing Moroccan staff. They were five young men, all about my age, and all very passionate about their Amazigh/Berber ethnicity. We made friends quickly and I wished I had volunteered there instead of in Chefchaouen, where my Moroccan counterpart was a grumpy old man. They were a lot of fun and they taught me so much about Morocco and their culture while I was there. 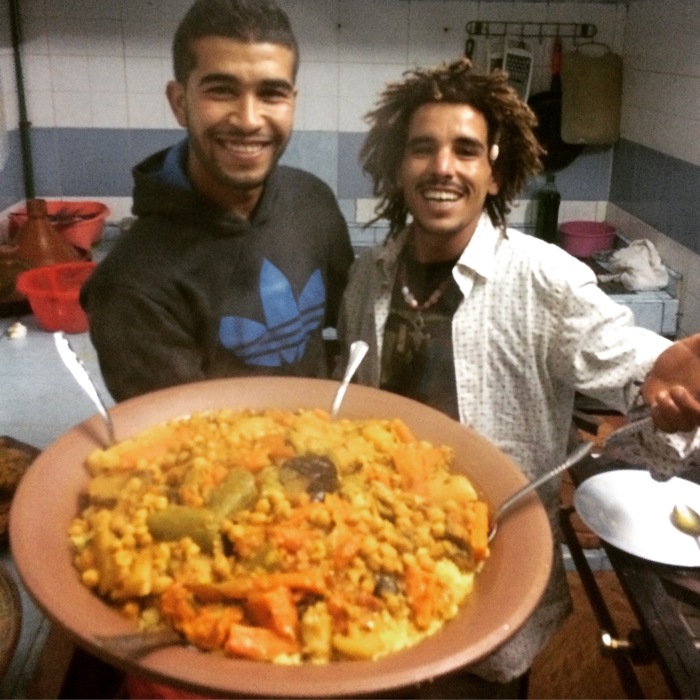 A few nights, I went with them and some other folks from the hostel to check out The Hole, the local bar. It is located at the end of an alley near the edge of the medina and isn’t really marked, other than by a bouncer-type man who stands outside and occasionally does bounce someone who is overly drunk. I had heard so much about this bar from other travelers who had visited Essaouira that I couldn’t leave without experiencing it. 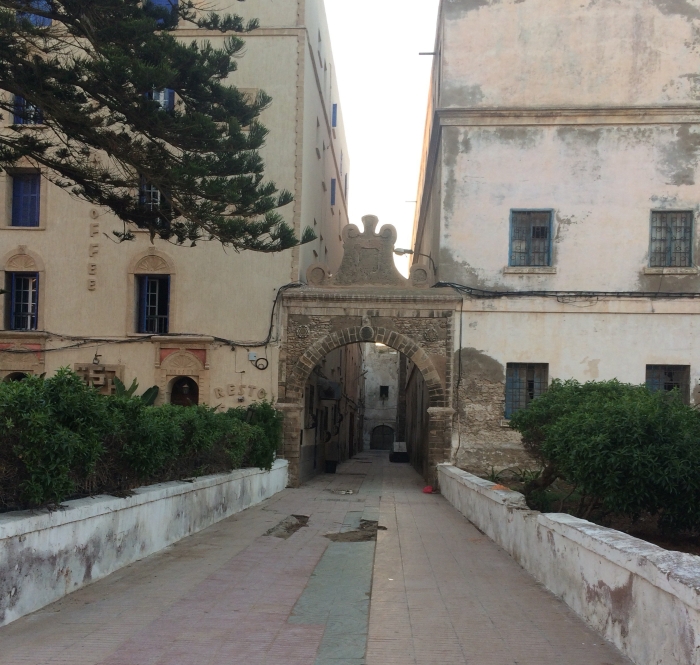 The Hole is down this alley and to the left

Honestly, with a name like “The Hole,” I was expecting it to be a lot grungier and more sketchy than it was.

It just looks like a simple pub inside – tile on the floor and the walls, fluorescent lighting, tables scattered throughout a couple rooms, a bar in the middle and a grumpy bartender behind it. The atmosphere is a bit weird – alcohol is forbidden in Islam, which 99% of the Moroccan population practices, so that is a fact that sort of hangs above the scene. One day, I bumped into a man I had met briefly at The Hole the night before, and he said, “hey, do you remember me? We met last night – at the bar.” He whispered the last bit with a sort of apologetic look on his face. But the beer is cheap and it felt safe to be there with the hostel staff and other travelers. We had some fun nights there, and when the last call finished around midnight, we walked back to the hostel together and hung out on the roof watching the stars and talking until we were tired.

Sunset from the roof of Atlantic Hostel

I have some really nice memories from the days I spent in Essaouira. It wasn’t only the staff that made my time so great – I also met a lot of awesome travelers at this hostel. I am not sure what it is about Atlantic Hostel that attracts wonderful people, but it does, and I found a lot of people here with similar interests whose company I enjoyed enormously. Most nights, everyone would sit around in the common areas of the hostel and play music. Drums and guitars got passed around and the staff all took a turn playing or singing. Some of the songs they played were traditional songs and others were newer songs by popular Amazigh artists. Musically-inclined travelers would join in with songs they knew and many hours passed this way, with the sharing of music and conversation between friends.

I miss that place. And I miss those guys.

This is the strange thing about travel, I’m finding. You are constantly making these meaningful connections and then almost instantly dissolving them again. There is a part of this process that is extremely painful, and some days I wonder why I am doing this to myself. But there is also beauty and value in it. A connection is a connection, no matter how short-lived it may be.

Even if these experiences are just exquisite moments in time that we share, never to be continued or recreated, isn’t that what life is made of?

Lots of tiny moments in time, all added up, create a life.