We’ve been in Morocco for over two weeks now and so far, it has surprised me. Though it is on the same continent, Morocco seems wildly different from anywhere else in Africa I’ve been.  Daniel wrote on his blog about his first impression of Morocco as a kind of in-between place, a melting pot of different cultures (find the post here), and I feel similarly.

I have been trying to sort out a theme for this post, but am not finding one yet, so I’m just going to share an assortment of observations and pictures here for now.

Chefchauoen, the city where we are staying for now, is actually a bit reminiscent of Colorado. Mountainous and mostly dry. The temperature has been around 80-85 most of the time we’ve been here. It feels hotter than that when the sun is beating down, but there does seem to be a siesta-like culture here, where things kind of close down in the hottest part of the day and reopen in the late afternoon.

The cities are divided into the old and the new. The old part is called the Medina. This part is surrounded by a wall that kept out invaders in the old days (you can see the outer wall in the photo above). In modern times, the medinas are pretty commercial and geared towards tourists, but local people also live there and the architecture is a lot older.

The medinas are difficult to navigate. The many tunnels, staircases, and alleyways make it tough to keep your bearings. After almost two weeks here, I finally am getting the hang of how to get around in the medina. Until now, I felt like I was in a Harry Potter book when I entered the medina – I would go up the same staircase and think I was taking the same route as a previous visit and then I would end up somewhere different than I expected. 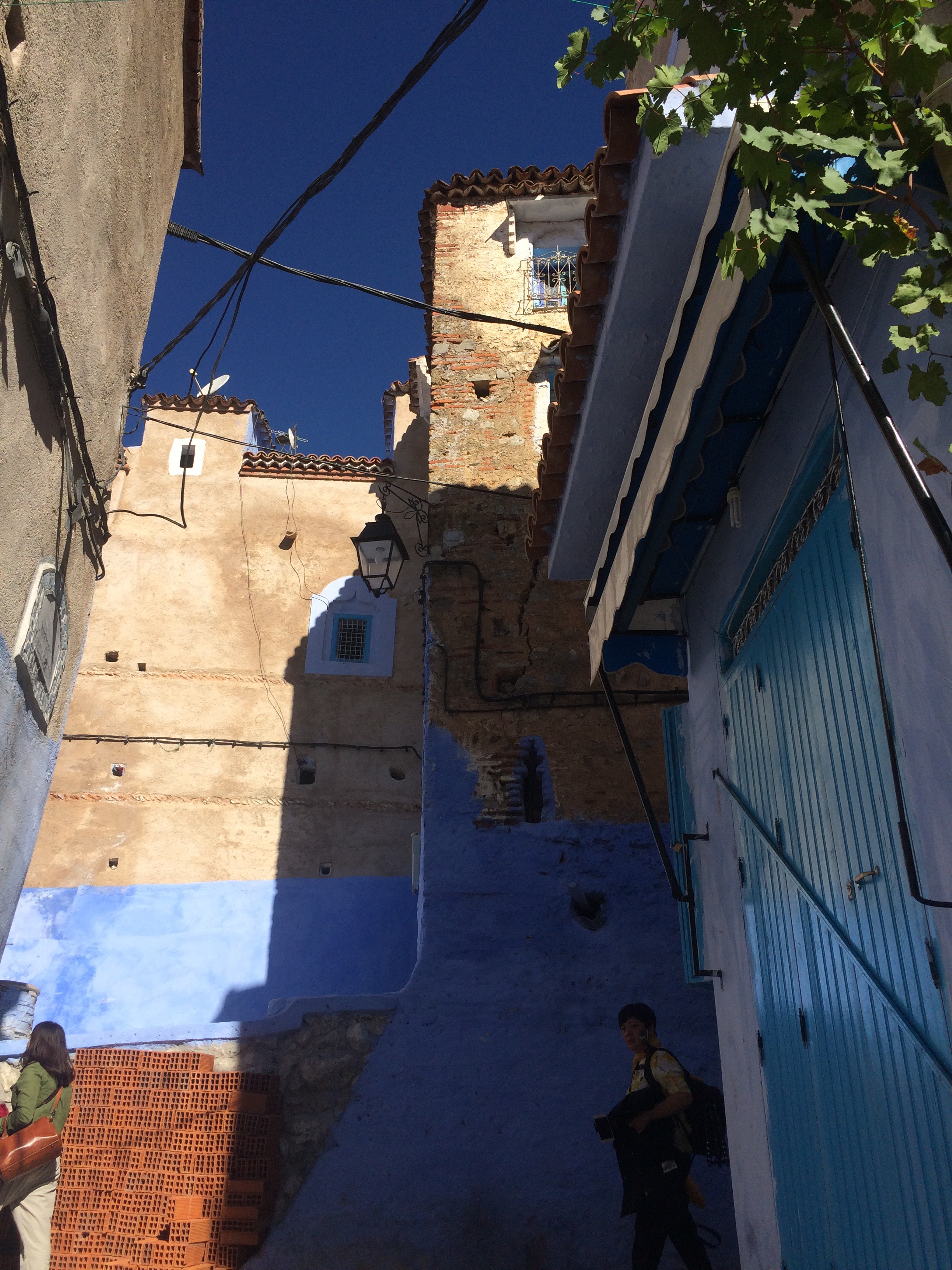 The main Moroccan dish is called tagine, which is kind of like a soup/sauce that is eaten with bread. [There is so much bread in the diet here.] The tagines are good and available in a variety of flavors. You can also get the sauce over couscous, which is excellent. A meal like this at a mid-range restaurant here is around $3 or $4. 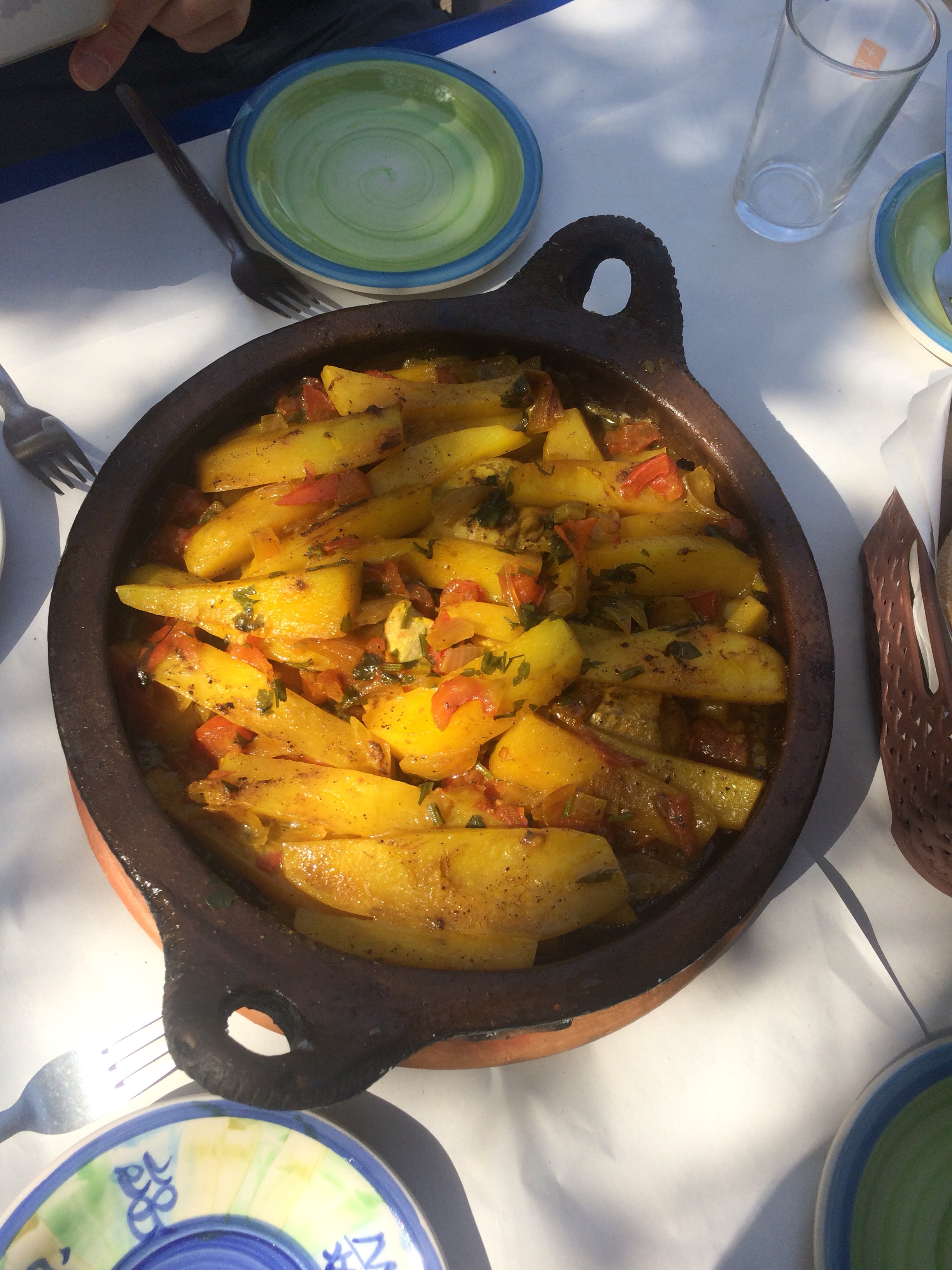 The best food I’ve had so far is at the tiny “restaurant” in a residential neighborhood pictured below. The owner took my order, yelled it up to the window of an adjoining house, then an old woman poked her head out, and a while later some delicious food was carried out the door by a young girl. Daniel and I have been back a couple more times and have met the whole family and lots of the neighbors. I’m slowly making friends with the 14-year-old girl, Laila, who speaks some French.

You can get less expensive food from fast food places, like the sandwich shop which is down the street from our hostel which sells foot-long sandwiches for about $1. I’ve been disappointed to find out that Morocco doesn’t have much of a street food culture (at least the cities we’ve visited so far don’t). There are a few food stands, but mostly they seem to cater to kids getting out of school, and they sell snacks, not whole meals.

Morocco’s main beverage is a very sweet mint tea (above) which is delicious and sold for less than $1. Cafes where men sit and drink tea and coffee for hours on end are abundant. Moroccan women are never seen at these cafes, but foreign women seem to be accepted there.

There are also a ton of fresh-squeezed juices available here, which are amazing. At juice stands throughout the city, you order what you want and they will cut the fruit and squeeze it for you right then, directly into your glass. In stores, they usually have electric juicers, but the guys at the street stands have to use a manual fruit smasher. It takes a while to make a glass of juice, but it’s definitely worth the wait. The main juices available are orange and pomegranate, which are both excellent, but there are also avocado-based drinks and other fruit options available at the larger shops.

Because Morocco is a Muslim country, alcohol is not readily available here. In Tangier, the first city we were in (pretty large and also extremely close to Europe), there were several bars, but in Chefchauoen, there is only one. Entering the bar is an interesting experience; it looks like any restaurant from the outside except that they have a security guad at the door. Inside, it is packed with people, both foreigners and Moroccans, enjoying a beverage or two. They sell beer and wine to go as well, so we’ve brought beverages back to the hostel a few times and enjoyed them on the rooftop.

Enough ramblings from me for now! Thanks for following along!