Last winter, I spent my Tuesday and Friday evenings working at the emergency shelter that our organization hosted for individuals experiencing homelessness.

It was our first year of staffing a shelter and I was surprised by how intimate the experience was.

The shift began at 5:30pm when we arrived at the shelter site (a church that generously lent us their space) and unloaded the food and supplies that we needed for that night. It ended after 10pm when the lights went out and our overnight staff took over.

We usually encountered a line of folks at the door when we first arrived – people who were cold, wet, and exhausted after a long day out in the cold and wanted to make sure they were the first in the door.

The first hour was pretty busy as we checked in each guest and got everyone situated with a mat, a blanket, and a meal. The process included a search of coat pockets.

You learn a lot about people by seeing what they keep in their pockets day in and day out. I found rosary beads, loose tobacco for rolling cigarettes, letters from loved ones, soaking wet clothing, bits of food for later, tools for work, and so much more.

During the next few hours, our guests were able to take showers, get their laundry done, charge their phones, watch TV… all the things one usually does at home.

As we entered those later hours in the evening, people would settle in, each claiming their own small space in the shelter. As folks walked around in the clothes they would be sleeping in, on their way to brush their teeth or shave, I sometimes was struck by the feeling that I was the guest, not them.

One night, I was sitting at the check-in table when a gentleman, we’ll call him Bryan, walked by on his way to the shower. He was playing music from his phone, and suddenly I recognized the song as one of my favorites.

I knew Bryan, had seen him around, but had never really talked to him at length. There had always been a barrier there – not exactly hostility, but something close to that. He was very independent and wanted to keep me at arm’s length, a boundary which I respected.

But when I heard that Ed Sheeran music coming from his phone, I had to reach out.

(Ed Sheeran just happens to be my very favorite artist. The picture attached to this post is from his concert at Red Rocks that my brother and I attended in 2015.)

“Hey, is that Castle on the Hill?” I asked as he passed the table.

“Well, yes it is,” he replied, turning towards me.”You know your Ed Sheeran music.”

“I love Ed Sheeran!” I exclaimed.

And in that moment, we connected.

We could have been two people anywhere.

Each of us weighed in on our favorite songs and we discussed the merits of Ed Sheeran’s new album compared to his old stuff.

All the boundaries of the shelter and where we were fell away; all the other guests faded into the background, the idea that I was a staff person and he was a client totally dissolved; any animosity I had previously felt from him was gone. We were just two people sharing a connection through music.

I admit that I was surprised to hear music I liked being played in the shelter that night. Even after years of working with people experiencing homelessness every day, I am still guilty of making subconscious prejudgements which are often wrong. That night,

There is just music and there are people and it connects us all.

In the following weeks, I will be sharing stories from my last few years of work with people experiencing homelessness.

Before I start on this project, I want to be clear. All I am able to provide is my own perspective. Each person has their own way of telling their story and my narrative does not in any way replace the narrative that could be told by each of these people individually.

I can offer my perspective and tell the story through my lens. That is all I aim to do, and in so doing, I hope to shed some light on an issue that a lot of Americans want to understand better.

That’s what will strike you if you start talking to folks who are unhoused. You’ll find that they are not as different from you as you think.

You’ll meet people who listen to the same music you do, share your hobbies, share your background.

You’ll talk with people who go to a job each day, take pride in their work and people who complain about their bosses and office politics, just like you do.

I’ve even encountered people who share my exact birthday and people who went to high school with me.

Truthfully, it is a bit disconcerting sometimes to look in this strange mirror which shows how different my circumstances could have been had I been dealt a different hand in life in one way or another. We Americans want to believe that we are in good positions because of our hard work and virtuous natures. We want to think that ‘we’ are ultimately different from ‘them,’ but I am continually reminded that this is not the case.

I have changed names and identifying details in these stories for the privacy of each individual that is mentioned in the following stories.

Please let me know what you think of this project as it evolves. Thanks for reading!

Looking back through my posts, I realized that I never followed up after posting the urgent plea for money for the school that Stacer, the PCV who followed me in Assanté, was building. I apologize for that!

Thank you all for responding to my post and helping to complete the funding! The project was successful and here are some photos of the new classrooms and the female latrines:)

Photo credit for all of these: Stacer McChesney. Great job, my friend!

And here is a message from Stacer after completion of the project:

It’s difficult to articulate the weight of your role in making this possible. Your individual contribution turned into cement, nails, wood, and sheet metal. Your funds went to a team of local masons, roofers, painters, drivers, shop owners, an their families.. And now this, a new place to learn for years to come.

It was really beautiful to watch.

Here are some photos of the community working on building the school and on the progression as it was built. THANK YOU SO MUCH! 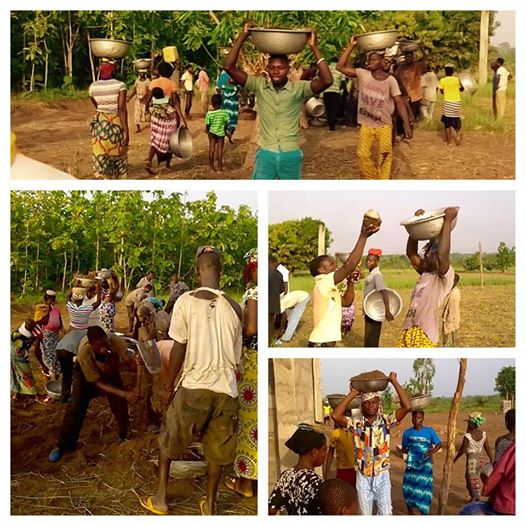 So incredible that this will help more students learn for years to come. Thank you.

Welcome to my revamped blog!

I decided to resurrect it as I have missed writing the past few years. Same site, different look! I hope you like it.

It’s hard to believe that November will mark four years since I returned to the States from Benin.

In some ways, it still feels like the Peace Corps days were just last week. In others, the two and a half years I spent living in Assanté feel so far away now that I sometimes wonder if that experience actually happened or was just a dream.

My last 3+ years have been spent living and working in Colorado, first primarily helping people in Boulder County recover from the flood of 2013 and then working with folks who experience homelessness in Longmont.

In some ways, being a Peace Corps Volunteer in rural Africa and working for a small homelessness non-profit in suburban Colorado are surprisingly similar. A lot of the skills I learned in Peace Corps came in handy here in Colorado, like working with limited resources, being flexible with plans that can change at any moment, and knowing how to meet people where they are and talk across the boundaries of different cultural experiences and backgrounds.

In the coming weeks and months, I’ll be sharing some stories from this work, hoping to shed some light on the issue of homelessness in our communities.

Up to this point, this blog has been exclusively about travel, but I hope you’ll join me on a different sort of journey, meeting some community members that many Americans know little about.

Not to fear, I have some more international travel lined up for later this year, so we’ll be back to travel stories soon enough!